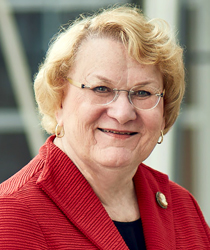 Upon appointment by Gov. Gavin Newsom

Lisa Middleton is serving her first appointment to the CalPERS Board of Administration. She was appointed by Gov. Gavin Newsom in May 2019.

Lisa also represents the Coachella Valley on the Southern California Association of Governments’ Transportation Committee. She is a member of the California State Department of Transportation Zero Traffic Fatalities Task Force.

Prior to her election, Lisa served as a member of the Palm Springs Planning Commission and as chairwoman of the Organized Neighborhoods of Palm Springs. She is a member of the board of directors of the Equality California Institute and the Desert LGBTQ Center. In 2014 she was the Center's interim executive director.

Lisa retired after serving 36 years with California's State Compensation Insurance Fund. At her retirement she was the senior vice president of Internal Affairs with executive responsibility for internal audits, fraud investigation, public records, and governance. Lisa was also a member of California's Fraud Assessment Commission, which she chaired in 2010.