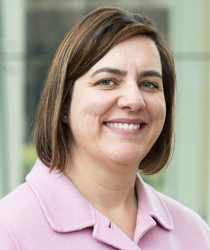 Upon appointment by Gov. Gavin Newsom

Eraina Ortega is serving her first appointment to the CalPERS Board of Administration by virtue of her position as director of the California Department of Human Resources (CalHR). She was appointed by Gov. Gavin Newsom in March 2019.

On behalf of the governor, CalHR acts as the employer of state employees in all matters pertaining to employer/employee relations, including collective bargaining; employee salaries and benefits; and job classifications, civil rights, training, exams, recruitment, and retention.

Eraina leads CalHR's department of more than 300 staff and manages an operating budget of $111 million.

Eraina also served as legislative advocate and manager at the Judicial Council from 2001 to 2008 and as a policy analyst at the California Legislative Analyst's Office from 1999 to 2001.

She earned a master's degree in public policy from the Harvard University, John F. Kennedy School of Government.