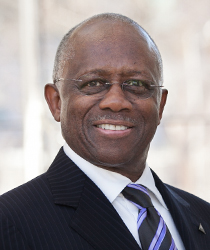 Henry Jones is serving his fourth term on the CalPERS Board of Administration and his second one-year term as president. Prior to being elected president, he served three years as vice president of the board.

He retired in 1998 from the Los Angeles Unified School District (LAUSD) — the second largest in the nation. As chief financial officer, he oversaw LAUSD's $7 billion annual budget. He also headed their Annuity Reserve Fund Board overseeing the pension fund for 7,000 schoolteachers and administrators.

Henry currently serves as a personnel commissioner for the Los Angeles Community College District. He is a member of the governing board of the Robert Toigo Foundation, a nonprofit organization that encourages minorities and women to pursue careers in finance. He also serves on the board of the Pacific Pension & Investment Institute, an educational organization that assists pension funds, corporations, financial institutions, and endowments worldwide with their fiduciary responsibilities, particularly in Asia and the Pacific region.

Previously, Henry represented CalPERS on the Advisory Council of California All, a nonprofit organization focused on closing the achievement gap from preschool to professional careers in law, financial services, and technology.

He has served on the board of directors for Community Partners, a nonprofit organization that works with social entrepreneurs, grant makers, and civic leaders to design solutions, foster, launch, and sustain initiatives for change.

In addition, he was the state finance chair for the Association of California Schools Administrators; treasurer for the National Council of Institutional Investors; chairman of the Los Angeles Schools Federal Credit Union; business development executive for IBM Business Consulting Services; and principal consultant for PricewaterhouseCoopers.

He has a bachelor's degree in business administration and finance from California State University, Los Angeles.

1Elected board members serve four-year terms that begin January 16 of the term and end January 15.